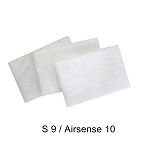 Sleep Apnea as a Disorder

Obstructive Sleep Apnea (OSA) is one of the most common sleep disorders, and affects an estimated 20-30 million Americans. People most likely to have OSA are those who snore loudly and are over weight, or who have high blood pressure or some physical abnormality in the nose throat, or other parts of the upper airway. It can be diagnosed easily with an over night baseline polysomnography, and can be treated easily with CPAP.

Certain mechanical and structural problems in the upper airway cause interruptions in breathing during sleep. In some people, obstructive sleep apnea occurs when the throat muscles of the soft palate at the base of the throat relax, the airway becomes blocked making breathing labored and noisy, and sometimes even completely stopping it.

When the airway stays open, a person is able to breathe normally throughout the night, which allows him/her to stay asleep. When the airways closes at night, the person stops breathing momentarily. When he/she begins breathing again, this causes a brief interruption in sleep. People with sleep apnea have difficulty staying asleep at night because interruptions in their breathing patterns cause arousals and/or awakenings.

Obstructive sleep apnea is closely associated with obesity. A short, fat, heavy neck puts a lot of pressure on the airway, particularly when the person is in the supine position. When the person falls asleep and the muscles in this area relax, the weight of the chest and neck can close the airway. During REM sleep, the most restful stage of sleep, the muscles are very relaxed. This relaxing of muscles increases the likelihood of the airway obstructing. Therefore, the most stressful stages of sleep are the stages that are affected by sleep apnea the most. This can lead to Excessive Daytime Sleepiness (EDS) and Hypersomnolence.

Obstructive sleep apnea is closely associated with abnormally sized structures (including tonsils, adenoids, tongue, palates, and many others) in the throat an upper airway. As these structures increase in size, the size of the airways decreases, and the likelihood of the partial or complete obstruction increases.

In addition to causing daytime sleepiness, OSA can cause a number of serious health problems. When obstructions in the airways occur the oxygen level in the blood (SaO2) decreases and the heart works harder to pump the blood through the body. This can lead to neurological disorders, strokes and cardiac problems. It is not uncommon for patients with OSA to have an extensive medical history including strokes, heart attacks, EKG arrhythmias, and fatigue related motor vehicle accidents. They also have decreased quality of life to EDS.